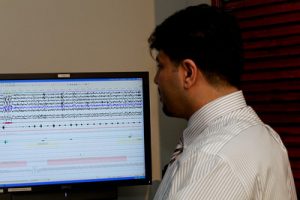 At the most basic level, you may be asked to keep a sleep diary in which you record all the significant features of your sleep experience, both those you are accustomed to and those that represent departures from the norm.

Most commonly, a sleep study will involve a series of noninvasive procedures ranging from a detailed questionnaire about your sleep, general health, and life circumstances to the direct monitoring of your sleep for one or more nights. We use the most current technology to track up to fifty physical functions, including brain activity, muscle activation, and breathing. An important additional source of data is audio and/or video monitoring.

The PSG has several applications, among them:

1. the Polysomnogram, which monitors for sleep patterns and abnormalities associated to such patterns during the sleep including sleep disordered breathing, abnormal limb movements and sleep architecture.

2. the Multiple Sleep Latency Test (MSLT), which indicates how long a patient takes to fall asleep after settling in for a nap;

3. the Maintenance of Wakefulness Test (MWT), which measures the length of time a patient can stay awake when leaning back on a pillow in bed;

4. determination of appropriate treatment for breathing abnormalities such as sleep apnea. The two most widely used treatments are: